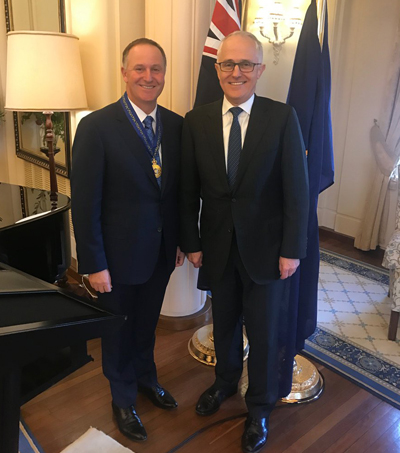 “Former New Zealand Prime Minister John Key has been awarded Australia’s highest honour in a ceremony in Canberra.” “Sir John, who led his country between 2008 and 2016, was appointed an Honorary Companion in the Order of Australia at Government House in Canberra on Tuesday,” writes Dan McCulloch for The West Australian.

The former NZ Prime Minister told Sky News Australia that he was “stunned and shocked like everyone else” by the honour.

“I very much feel it’s been bestowed on New Zealand. It’s a reflection of the Anzac relationship,” Key told Newshub.

“You are a most admirable New Zealander, a great leader, a great friend of Australia, and a worthy recipient of this honour,” said Governor-General Peter Cosgrove.

“Sir John was given the nod for helping drive economic growth in Australia and New Zealand and his leadership in tackling international security challenges,” reports the article.