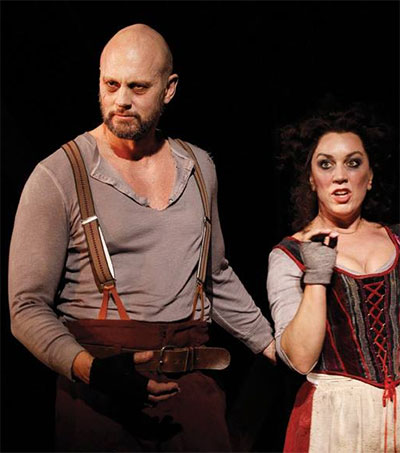 Rhodes, playing Sweeney for the first time, hasn’t watched the Tim Burton adaptation starring Johnny Depp, preferring to put his own spin on the character, a 19th century barber who returns to London after being convicted of a crime he didn’t commit and sent to a penal colony. Todd moves into an apartment above a pie shop owned by Mrs Lovett, played by Antoinette Halloran in Stuart Maunder’s production. With Lovett’s help, Todd sets about exacting revenge on the judge who sentenced him in a particularly savage fashion.

The score is one of Sondheim’s most complex – making it particularly challenging for the performers.

Christchurch-born Rhodes told Time Out Melbourne about Maunder’s vision for the role.

“He see[s] him as this caged man, slightly unhinged, and you never know what he’s going to do next.”