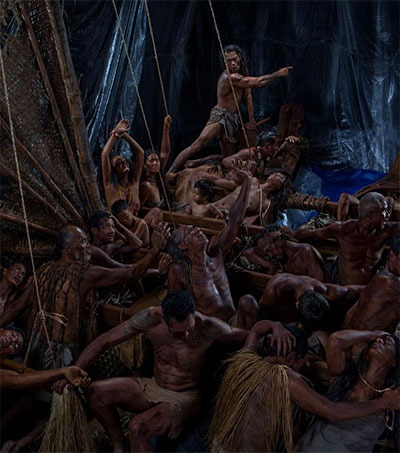 In a new exhibition at the National Gallery of Victoria (NGV) called, The Raft of the Tagata Pasifika (People of the Pacific), Auckland-born photographer Greg Semu presents a series of powerful photographic works, using large-scale photography to address and reinterpret the complex and problematic depictions of colonisation in historical art.

On until 11 September, The Raft of the Tagata Pasifika draws attention to the impact and reality of the collision of indigenous tribes as well as the colonisation and Christianisation of the Pacific.

“Semu’s work grapples with Western art history and leads us towards a Maori understanding of the events surrounding their ancestors’ migratory voyage to New Zealand,” NGV director Tony Ellwood said.

The Arrival of the Maoris in New Zealand (1898) depicts a group of Maoris, emaciated and exhausted, the moment – during the 13th century – that they first sight the land that they would go on to claim as their own: New Zealand. Painted by Charles Goldie and Louis John Steele, it carries the narratives of the Romantic era and, like a lot of colonial art, makes some gross historical assumptions and generalisations about the event.

According to Te Ara, the painting was modelled on Théodore Géricault’s “The Raft of the Medusa”, which had been exhibited in Paris in 1819, three years after the Medusa, a French naval vessel, was wrecked off the coast of Senegal.

In his photographic installation, Semu restages the painting with a powerful tableau that features 22 indigenous actors from the Cook Islands.

Semu – who prefers to embrace Samoa as his spiritual home – is known for his artwork addressing themes of cultural displacement in the Pacific and is a new and powerful force on the Asia Pacific art scene.