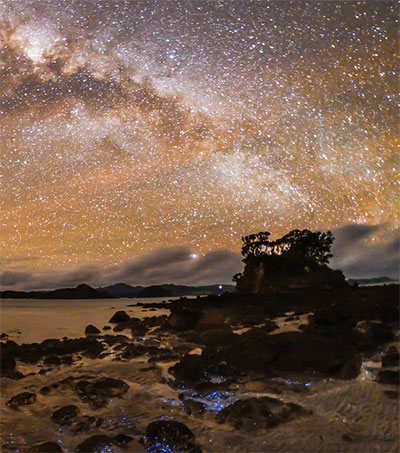 The off-grid Great Barrier Island, 90km off the coast of Auckland, is a Dark Sky Sanctuary ideal for star gazing – and the views by day are heavenly too. The Observer’s Chris Hall looks skyward.

“We were going to my girlfriend’s big family reunion in Auckland, but when we found out that Great Barrier Island, just off the coast, had been recently awarded Dark Sky Sanctuary status – a typically remote area that has an ‘exceptional or distinguished quality of starry nights’ – we thought it would be the perfect place to unwind before our busy schedule,” Hall writes. “It’s the first island and only the fourth location in the world to achieve this (along with Chile’s Gabriela Mistral, the Cosmic Campground in New Mexico and Rainbow Bridge National Monument in Utah).

“Great Barrier is off-grid and the 950 people living there (though only about half permanently) rely on solar and wind energy, and bottled gas for cooking. There are no streetlights. There are no cash machines or banks. The police force comprises a husband and wife, and there’s one postie. It’s not just the lack of light but the lack of noise that’s so blissful on this unique and stunning little idyll. It was first discovered by East Polynesians about 700 years ago and the Māori name for the island is Aotea (canoe). Captain Cook gave the island its European name, because it acts as a barrier between the Pacific and the Hauraki Gulf.

“The climate here is subtropical like Auckland’s, but it’s windier and more rugged; a beautiful wilderness with lush forests, glorious, unspoilt sandy beaches and plenty of bays and a few mountainous areas where there are good walking tracks among the wetlands and gorges, including the three-day Aotea Track. You can birdwatch, snorkel, surf and kayak. The best beaches are on the eastern side of the island where the surf is better, too. The sheltered western side is where you’ll find the best diving and boating. Lots of people come here for the fantastic fishing spots around the island – snapper, squid, cod. Like a lot of spots in New Zealand, there are dolphin and whale-watching trips and you might just catch sight of hammerhead sharks.

“It’s rare to find an island that really does feel undiscovered – but this is it.”