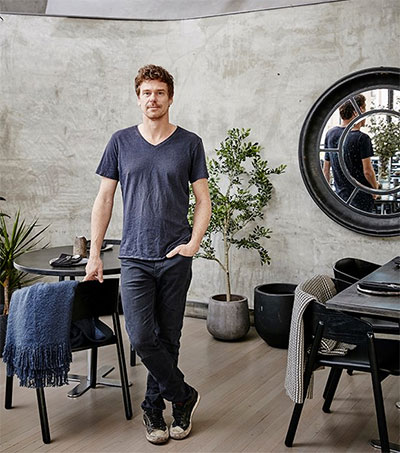 Grant King’s The Antipodean Most Promising

“Grant King hails from New Zealand, and has decided that cooking with ingredients sourced from Australasia is the way forward. The menu at The Antipodean [in Potts Point, Sydney] is blissfully unadorned by anything resembling a philosophy or a mission statement. If you’re looking for a place to pigeonhole it, just file it under ‘very tasty food’.” Pat Nourse reviews the restaurant for Gourmet Traveller.

“Among the tastiest things it serves is shavings of New Zealand abalone with a gooey-centred egg. The thing that pushes it firmly into whoa-baby territory is the combination of the abalone and some shiitakes King has found in the Blue Mountains. The singular texture of abalone, given a slippery rhyme by the mushrooms, goes past the sublime into deeper territory.

“King likes to team clams with smoked bacon vinaigrette, throw fermented squash and pepperberry at raw kangaroo, and make a butter out of pickled walnut to complement the serious beefy richness of Rangers Valley tri-tip. He makes a fresh blood pudding and then takes a sharp left with the addition of quandongs and pickled banana shallots. White vinegar reduced with sugar and lemon peel into a gastrique, meanwhile, unites a perfect pale-pink hunk of roast suckling pig on the plate with a glowing orange round of persimmon.

“In The Antipodean, King plays gently instead with our notion of ‘local’. What’s closer in food terms – Perth or Auckland? What does a fish know of national boundaries. It’s a concept short on soapbox and long on flavour; hopefully it’ll prove a robust vehicle for an unusually talented Australian chef.”

King is formerly of Gastro Park, which he opened in 2011 on the same site as The Antipodean, and which attained two Chefs Hats from the Sydney Morning Herald.