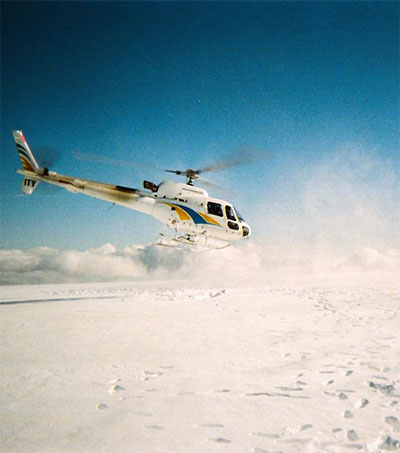 For their weekly “First-Person Shooter” column, VICE magazine shipped a couple of cameras across the globe to Josh, a helicopter pilot in New Zealand who has been flying for over seven years. He works for Milford Helicopters, where he goes on five or more flights a day, usually taking tourists to high mountain tops or delivering workers and supplies to small islands, lighthouses, and ships in the middle of the ocean.

On top of snapping photos of the tourists he brought to Mount Parariki, a summit almost impossible to reach except by helicopter, Josh took a few exposures of his trip while dropping two technicians off at a lighthouse located at the top of a remote point completely cut off by mountains and sea. Later in the day, he also used a different, larger helicopter to lift life rafts back onto a ship’s deck.

Josh tells VICE he carries a huge variety of cargo onboard.

“[I transport] camping gear for hunters, trap supplies for trappers, tools and electronics for technicians. Sometimes a customer will be doing track maintenance and we will fly bags of plain old gravel on the end of a rope all day,” Josh says.

“[I fly] anywhere and everywhere — the beauty of helicopters,” he says. “Tutoko Glacier is where our scenics go so we land there most often. Working passengers will always be going somewhere where they have a job to do that cannot be accessed by road. The famous Milford Track is in Fiordland National Park, so a lot of our work revolves around this.

VICE asks Josh if it was difficult to take the photographs for their column.

“Harder than I thought it would be. You can free up one hand easy enough, but the shape of the cockpit, plus the people in it, can make it difficult to photograph certain angles.”