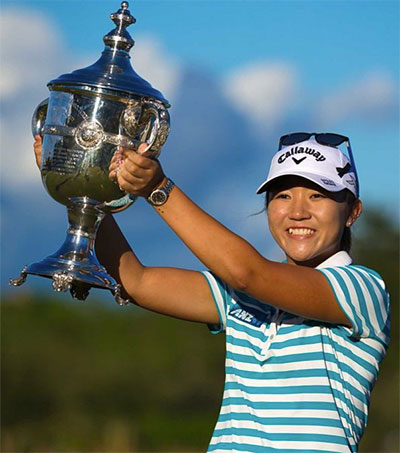 Eighteen-year-old Aucklander Lydia Ko has scooped the US$1 million LPGA Tour jackpot and has been named the women’s LPGA Player of the Year, becoming the youngest in its 49-year history to do so.

Ko retained the Race to the CME Globe title – given to the golfer who wins the most points during the LPGA Tour season – to pick up her bumper prize.

“It’s been a long season of ups and downs as well, mainly ups, but I think every emotion went through me today,” Ko said. “I think the hole was smaller than the ball today.

“I’m happy that the season is over and I can relax now.”

In September, she won her first major title at the Evian Championship in France, and October’s victory at the co-sanctioned Taiwan event was her fifth success this season.

“At the start of the week, I would say the biggest trophy that would mean a lot to me would be the Rolex Player of the Year,” Ko told LPGA.com.

“I’m so thankful to my team. I’m still emotional.”