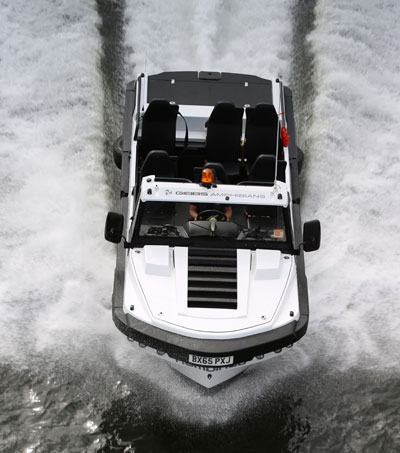 “Gibbs Amphibians (Gibbs) is establishing a strategic partnership with the Madaeen Al Doha Group for the supply and assembly of the Gibbs Humdinga amphibian vehicles,” as reported in The Gulf Times.

“The subsidiary, called Gibbs Amphitech, will be based in Qatar and will supply Gibbs products in the region and other key markets including Australia, Canada and the UK.”

“Today’s announcement about establishing the first factory for Amphibian vehicles is a great millstone for both Qatar and the Arab world,” said Mohamed al-Sada, partner, Madaeen Al Doha Group.

“The first phase will revolve around assembling the ‘Humdinga’ in Qatar as a first step till the factory commences production of all GIBSS’s amphibian models to be able to supply global demand for this technology which is expected to be available in the local market before 2022 and bear the ‘Made in Qatar’ stamp”.

“There is a developing global demand for the Humdinga, and we are receiving high levels of interest from all kinds of customers, including governments and private individuals,” said Gibbs founder Alan Gibbs.

“This is the right time and the right opportunity to further the use of Humdinga, and I expect we will see them being widely used in many parts of the world in the near future. This is the right step because Gibbs products are high value and high tech, and we are keen to work with partners who share our vision and values, as the Madaeen Al Doha Group do.”

“Over the last 20 years Gibbs has invested hundreds of millions of pounds, and more than three million man hours, in the maturation of the technology. This has resulted in more than 400 patents and patents pending worldwide, making Gibbs the global leader in High Speed Amphibious technology.”

“The Humdinga is one of the more rugged vehicles created by Gibbs, capable both off-road and on-water. It seats up to nine passengers, with the signature Gibbs central driving position and can carry up to a tonne in payload. It reaches speeds in excess of 40mph on water and over 80mph on land, with 4wd and twin Gibbs proprietary water jets.”

“The Humdinga is a flexible platform, capable of applications from logistics to search and rescue, from police patrols to private leisure. It has been manufactured under license in South East Asia but has never been available to the public, or to such a wide region before.”