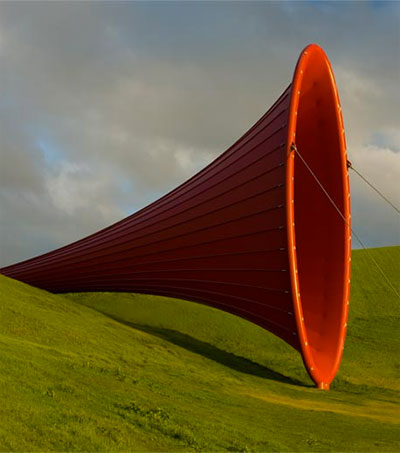 “We didn’t think anything manmade could compete with the grandeur of New Zealand’s natural beauty. Then we went to Gibbs Farm Sculpture Park, near Auckland,” Guardian reader Moira writes for a photo gallery special in the newspaper, which celebrates the world’s best outdoor art installations.

“The scale of the site and of the exhibits, by artists of international renown, is breathtaking,” writes Moira. “Standouts for me had to be a dazzling Eric Orr work titled Electrum, which threw lightning bolts; Anish Kapoor’s red trumpet-like structure called Dismemberment; and Gerry Judah’s stainless steel Jacob’s Ladder, which seemed to shift with the changing light, sometimes looking like billowing smoke, sometimes a twister straight out of The Wizard of Oz.” The 257-meter Richard Serra work Te Tuhirangi Contour is the artist’s largest work. Serra’s 56 steel plates lean out by 11 degrees from the vertical and trace a single contour line across the land in a way that, in the artist’s words, “collects the volume of the land.”

The Wall Street Journal reported on Gibbs Farm in 2017, asking: “How does a sweeping landscape shape an artist’s creativity? Alan Gibbs found out by building one of the world’s largest contemporary art parks in Kaipara Harbour, New Zealand.” Gibbs Farm holds open days and is open to artists, educational institutions, charities and the public, by prior appointment, according to its website.

Alan Gibbs is one of New Zealand’s most successful entrepreneurs and was inducted into the New Zealand Business Hall of Fame in 2018. He studied engineering and economics at the University of Canterbury, where he was awarded an Honorary Doctorate, and Victoria University in Wellington where he graduated MA before working as a New Zealand diplomat in the UK and on several business ventures. “Gibbs worked in merchant banking in both Australia and New Zealand, before establishing and running his own business: companies such as Ceramco, Bendon and Tappenden were among his various acquisitions,” Auckland Chamber reports.  Gibbs was an original investor in the newly formed Telecom New Zealand in 1987, and chaired the Forestry Corporation for the New Zealand government.

In the early 1990s, in response to the Kaipara Harbour coastal conditions – one of the largest harbours in the world, covering 947 sq km at high tide, and 409 sq km exposed as mudflats and sandflats at low tide – Gibbs began experimenting with amphibious vehicles, leading to the formation of Gibbs Amphibians in 1998.  The privately held company operating from New Zealand, Detroit and Nuneaton in the UK became the first “in history to successfully create fully homologated vehicles that can exceed 30 mph on water as well as achieve typical speeds on land, transitioning between land and water in under 5 seconds, at the push of a button.” The Gibbs Aquada established multiple speed records and its launch on the Thames River, London on September 3, 2003 was the most covered news story in the world that day. The Aquada can reach speeds of 160 kph on land and 50 kph or 27 knots on water.

“This unique combination of innovations from several engineering disciplines and user-friendly technology has given Gibbs the lead as the world authority on High Speed Amphibians,” as outlined by Gibbs Amphibians.

Kai means food in Maori. The name Kaipara had its origins back in the 15th century when the Arawa chief, Kahumatamomoe, travelled to the Kaipara Harbour to visit his nephew at Pouto. At a feast, he was so impressed with the cooked root of the para fern, that he gave the name Kai-para to the district.