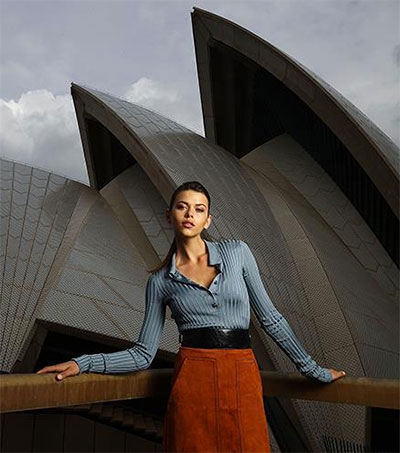 New Zealand-born New York-based model Georgia Fowler, who is in Australia for Mercedes Benz Fashion Week, has been announced as the ambassador for Etihad, and has travelled to Sydney to celebrate the airline’s 10th anniversary of service to Australia, and their local launch of the Runway To Runway programme.

Working the world over, Fowler’s skincare routine is streamlined for maximum efficiency, and in turn, maximum carry-on space.

ELLE magazine asks the New York-based Victoria’s Secret model how she preps her skin for Australia’s busiest week on the fashion calendar. Well, it begins with exfoliation, face wash, and a whole lot of serum.

“There’s so much product on you all the time when you’re modelling, so I like to keep things simple and fresh,” Fowler says. “Sometimes I feel like I need a really good exfoliation after having so much makeup off and on and off and on, so I’ll use a deep exfoliating cream.

“Over fashion week everyone’s dehydrated and tired, and I think that’s really when your skin starts faltering too. Drinking lots of water is key.”

Fowler grew up in Auckland and attended Diocesan School for Girls.