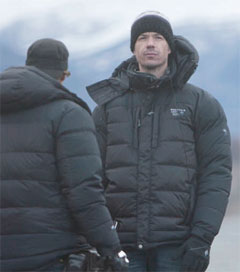 Freeze Frame in the Alaskan Wilderness

New Zealand director Scott Walker, who is currently promoting his first feature film The Frozen Ground, talked recently to KFTV about all aspects of the production, from development and casting right through to getting caught in the worst superstorm Alaska has seen for three decades.

Starring Nicolas Cage, John Cusack and Vanessa Hudgens, The Frozen Ground is based on the true events of the 1980s when a huge manhunt was underway in Alaska for serial killer Robert Hansen (Cusack), who stalked, kidnapped and murdered between 17 and 21 young women, burying them in the Alaskan wilderness.

In Walker’s experience, there are two sides to shooting in Alaska: the first is the great tax incentive, which he says is “probably one of the best in north America”. But the challenge is, according to Walker, that due to a lack of big productions, equipment needs to be brought in from elsewhere, as does many of the crew.

And then there’s the extreme weather.

“We got hit by the largest superstorm in Alaska in 30 years. Things got very bad: we were shooting out on the river in the wilderness with 50 mile an hour horizontal sleeting rain, even helicopters being grounded. And there was Cage standing in jeans and a jacket.”