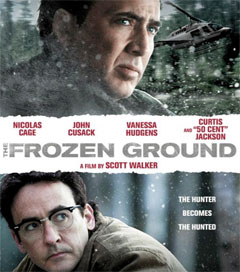 New Zealand-born writer-director Scott Walker’s “impressive debut” The Frozen Ground, starring Nicholas Cage and John Cusack “amounts to an exploitation flick about the hunt for Alaska’s most notorious serial killer, but told with style and panache. Strong performances, fevered pacing and immersive location lensing are big pluses pushing this from ‘B’ pic to A-,” Doris Toumarkine writes in a review for Film Journal International.

“[Based on a true story], The Frozen Ground is a highly watchable, handsomely produced, fact-based cat-chases-rat thriller about a dedicated Alaskan trooper determined to entrap an Anchorage mass murderer. Easy on the eyes and convincingly hard-boiled, the film deserves big-screen patronage, although it’s out day-and-date as an iTunes rental and on VOD.”

Paste Magazine reviewer Annelee Ellingson wrote: “Reminiscent of this season’s The Killing, with its focus on runaway girls who survive on the streets by selling their bodies, and [Jane Campion’s] Top of the Lake, with its remote, rugged location, The Frozen Ground feels like it might have been a better fit on television, where the intricacies of the case could have been more thoroughly explored.”

Walker is currently working on a werewolf comedy called, Bullet Blood Wild, a true story about a DEA drug bust of Mexican drug cartels and a motor racing epic.