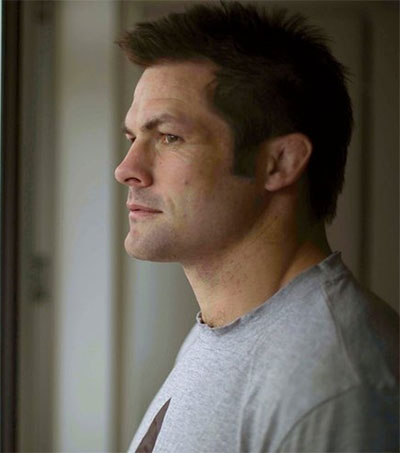 Justin Pemberton and Michelle Walshe’s documentary Chasing Great, about world-champion All Blacks captain, Richie McCaw, “proves surprisingly accessible to non-fans, and [is] a well-articulated look at some of the mental processes behind sports success,” according to the Film Journal International’s Frank Lovece.

“Though clearly aimed at audiences in countries where pro rugby is a thing – i.e., not the US – this documentary about the Michael Jordan of that sport, Richie McCaw, is sufficiently slick and so classically formulaic in its sports story about overcoming odds, being mentally prepared and working hard to achieve success that it becomes fairly universal,” Lovece writes.

“Between that and the surprising elegance of the rugby-match sequences, in which the famously brutal sport achieves a weird grace of almost basketball-like ball-handling, Chasing Great may reach audiences interested in a sports documentary about something beyond the usual sports.

“Chasing Great focuses on [McCaw’s] final year before retirement, culminating in the quadrennial World Cup of 2015. The filmmakers segue seamlessly back and forth from there to his childhood – seen in home videos and some reenactments – to a high-school championship match that got him noticed by Hansen; to his first All Blacks appearance on 17 November 2001, where the rookie was named the game’s MVP; and to milestone matches in 2007 and 2011. We meet his sheep- [farming] family in remote Canterbury, and later his girlfriend from about 2012 on, pro field hockey player Gemma Flynn.

“Chasing Great also gives insight into the mental steel that a champion needs, with McCaw working closely with a forensic psychiatrist, Dr Ceri Evans, who taught him, he says, ‘clear thinking under pressure rather than just thinking positively.’ He compares it to pilots, who have a mental checklist of things from instruments to weather to account for, and who need to juggle all those factors with clarity and precision. In rugby terms, that can mean anticipating where the tackle is going to occur, allowing you to take the shortest route rather than having to be the fastest player.

“Such well-articulated explanations of champions’ mysterious mental processes help make Chasing Great about more than rugby. And the haka that the team performs pre-match helps make Chasing Great odder and cooler than you might expect.”