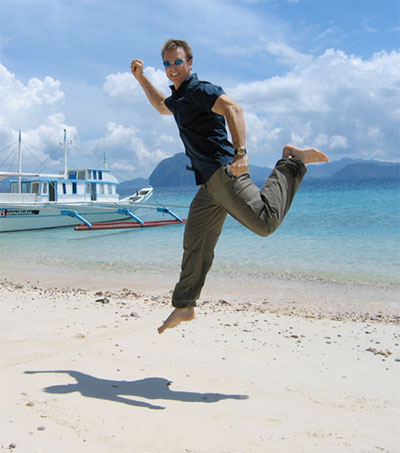 Keoghan gets around. The host of the Emmy-winning CBS show since its debut in 2001, Keoghan, 47, has worked in more than 70 countries as host, producer, writer and cameraman on adventure-related shows over the last 30 years. A serious cyclist, he’s completed the legendary Leadville 100 mountain bike race, “The Ride” and “Le Ride,” 100- and 150-mile-per-day circumnavigations of the US and France that he created and filmed for Showtime. Here’s how he does it.

Amazing Race contestants do crazy things – rappel down canyons, travel by hot-air balloon, build tribal headdresses. Can you relate? the publication asks him.

“Definitely. For a show on FX, I changed a light bulb on the Verrazano-Narrows Bridge, cleaned the inside of a shark tank at Coney Island, milked spiders, interviewed the man with the world’s biggest ball of string, went down into a sapphire mine in Alaska … Fortunately, I like staying fit.

“[During filming] my workouts [are] often just whatever I [can] do in an airport. I’ll balance on one leg and lift bags like they’re weights. I’ll press and curl bags and backpacks, and do squats and lunges. In a hotel room, I’ve bench-pressed a table and put phone books in pillowcases to do triceps extensions. I’ll use the bathtub for dips. If I have 15 to 30 minutes, I’ll do the hotel stairs.”

Keoghan was born in Lincoln. He was made a Member of the New Zealand Order of Merit in the 2014 New Year’s Honours, for his services as a television presenter and to tourism.