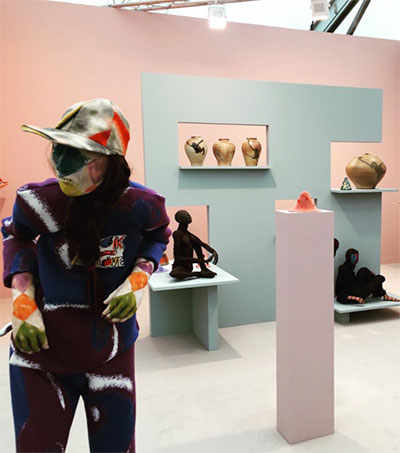 New Zealand-born Francis Upritchard’s solo presentation at this year’s Art Frieze Fair in London at the booth of London dealer Kate MacGarry, was the “best and most absorbing” of the exhibits, according to the Evening Standard’s Ben Luke.

Upritchard’s show was “a deliciously weird and colourful museum of mankind in which even the lamps on the table are handmade”, Luke writes.

Luke praised the “quirky poses of her diminutive, delicately painted figures: Seraphina Purple Kiss (2016)”, which seemed “to be caught energetically dancing … Elsewhere, a hippie-ish figure gently caresses his erect penis, while others [were] caught in spiritual reverie.”

“Complete with ceramics, clearly evocative of ancient cultures, and playful textiles, often in the form of eccentric hats, Upritchard’s mock-museum display was a tour de force.”