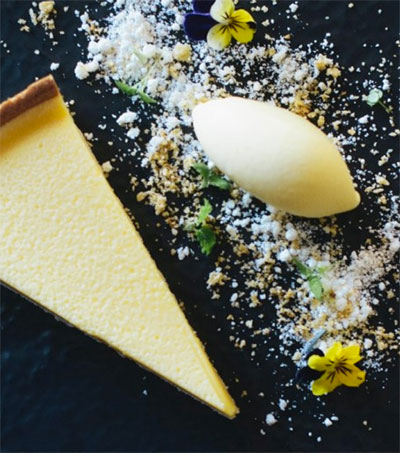 “Quenelle. You wouldn’t think that such an elegant word (apparently derived from the less fancy German word knoedel) could strike fear in the heart of a chef. But standing in front of my heroes and some of the most celebrated chefs in the world, about to attempt a perfect quenelle, I felt more frozen than the ice-cream sitting on the pass in front of me – waiting to be formed into a football-shaped glossy dumpling,” New Zealand-born chef Peter Gunn, owner of Melbourne’s Ides, writes in an opinion piece for Good Food.

“As popular culture has taken an increasingly keen interest in the culinary arts, techniques like the quenelle have crossed over from professional kitchens into the home. I’m sure that after watching some inspiring cooking show, many home cooks have been brave enough to try it themselves. Those who have succeeded will understand the feeling of achievement in creating the Perfect Quenelle.

“Culinary fans will also understand the gravity of the situation I found myself in on the day in question: working as a chef at a Starlight Foundation dinner at Rockpool and assisting [fellow New Zealander] Ben Shewry alongside culinary greats Thomas Keller and Grant Achatz.

“Grant was holding the warm spoons for Rockpool’s pastry chef to make the ice-cream that topped the dessert. When the pastry chef was suddenly called away, Grant called me over to finish the plates and held out the spoons for me to use. Talk about fear. I was petrified! There I was being asked to quenelle in front of one of my ultimate heroes.

“I knew I had to push through so I gathered myself, put my head down and pulled out one quenelle of ice-cream after another. My concentration was so intense, everything else faded into the background and I became a quenelling machine. Before I knew it, I had finished all the plates and forgot that Grant was standing beside me, watching every quenelle come off that spoon. He ended up calling Thomas over.

“After that experience, I understood that no quenelle could ever live up to the ones I sent out that day. I vowed to never quenelle again. Quit while you’re ahead.”