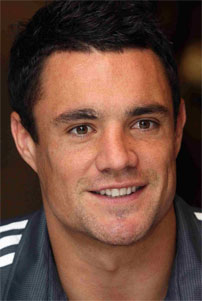 Described as the world’s best number 1, All Black Dan Carter is focused on one thing: winning. And not just the William Webb Ellis Trophy at the Rugby World Cup, but also as part of Canterbury’s Crusaders team in the regional rugby competition Super 15, which is being played by the top club teams in South Africa, Australia and New Zealand. The team is through to the semifinals after beating South African team the Sharks 36-8 in a game where Carter scored 19 of the points. Christchurch-born Carter tells the Wall Street Journal that his first game with the All Blacks was a highlight of his career. “Ever since I was a kid I wanted to wear the All Blacks jersey, do the haka and sing the national anthem and then I got presented with my first All Blacks jersey and I ran out on to the field in Hamilton in 23 against Wales” he says. Carter has the hopes of the Pacific nation resting on his shoulders at this year’s Rugby World Cup set to kick off in Auckland on September 9.