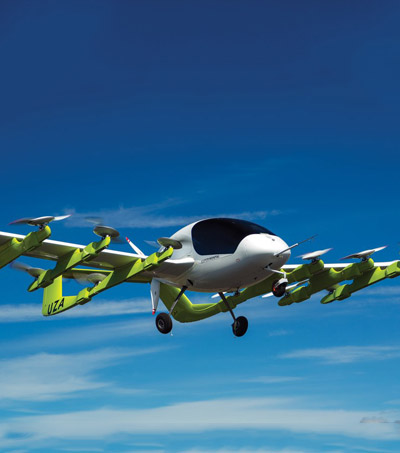 “Cora will use self-flying software combined with human oversight to make flying possible for people without training.”

“Led by Sebastian Thrun, who is also a founder of Google’s self-driving car programme and online education service Udacity, Kitty Hawk operated largely in secret until April 2017, when it unveiled a prototype of its Flyer — a single-person ultralight aircraft powered by eight electric rotors.”

While The Flyer is designed to be used only over water and sold to private individuals, “Cora is a more ambitious vehicle, with 12 independent rotors capable of carrying two people at heights of between 150 metres and 900 metres.”

“Kitty Hawk’s mission is to completely change the way we get around. We succeed if everyone chooses to fly every day,” said Thrun. “With our prototype air taxi Cora, we are applying eight years of research and development into an entirely new way to commute.”

“Kitty Hawk envisages eventually operating a service “similar to an airline or a rideshare”. The company has received an “experimental airworthiness certificate” for Cora in New Zealand and the US,” reports the article.

“Innovation is in our DNA — Kiwis love a challenge and pushing the envelope and I think it’s that spirit that resonates with innovators around the world.”