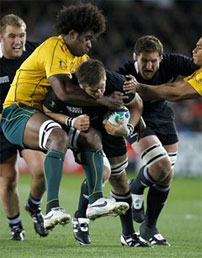 First Win of the Series

The All Blacks have won their first post-World Cup tournament against the Wallabies in the Rugby Championship opener beating the Australians 27-19 in Sydney. Australia must win at its Eden Park graveyard on 25 August if they’re to keep alive hopes of stopping a 10-year Bledisloe Cup dynasty for New Zealand. All Blacks coach Steve Hansen said: “[It was] probably not the most perfect game in the world, but we had two sides coming off the breaks that we’ve had and playing at the intensity we are playing you are going to get errors.” Dan Carter rubbed salt into the wounds after the siren, booting a penalty kick to rob Australia of a crucial bonus point in the first game of the inaugural four-nation Rugby Championship.