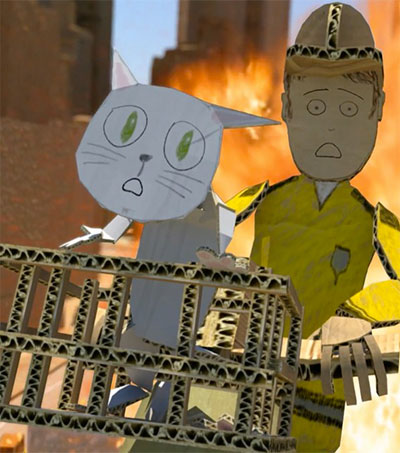 “The clever and freewheeling nine-minute animated short Fire in Cardboard City, directed by [New Zealander] Phil Brough, which had its US debut at this year’s Tribeca Film Festival, is a mini disaster movie that feels like a joyride,” Sarah Larson writes for the New Yorker’s regular ‘Screening Room’ column.

“It begins with sirens, action music, and a cardboard car careening across a cardboard bridge, chased by cardboard cops through an elaborate cardboard metropolis,” Larson writes. “The fleeing driver’s agitated expression appears to have been drawn on in ballpoint pen. The 3D animation is extremely realistic, as if an ambitious child created a miniature world, à la Caine’s Arcade, and it suddenly came to life.

“Brough, who is 46, is [originally from Queenstown], and an animator with a comedy background; he was on a late-aughts New Zealand comedy series, Back of the Y, whose co-creator, Matt Heath, co-wrote Fire in Cardboard City with him. Brough first used the cardboard style in a segment he did for the ‘Star Wars’ Uncut’ project, from 2009, in which filmmakers re-created shots from Star Wars in a variety of styles.

“Why cardboard? ‘A bit of a do-it-yourself look,’ [Brough] said. ‘There were certain things that I could make look more real than others in 3D. That one worked.’ Cardboard isn’t very reflective, he pointed out – ‘I got away with making the whole thing flat-shaded,’ he said, which simplifies the process – ‘and it is not organic. Living organic things are much harder to render in 3D realistically than something like cardboard.’ Pixar’s early films faced a similar challenge: there’s a reason they’re about toys, cars, and things with exoskeletons.

“The results look so realistic that they could almost be stop-motion. We’re all living in Cardboard City nowadays, I thought grimly at one point. But Brough’s explicit aim is escapism – no allegory allowed.

“Brough is currently developing a related series to air in New Zealand, and is now happily in the process of visiting more disaster on Cardboard City’s unsuspecting residents, in the form of additional ‘blockbuster-type scenarios.’ ‘I’m actually getting to do the giant robot, which is really fun,’ he said, cheerfully. ‘It’s sort of like Godzilla. Then there will be an earthquake and an alien invasion.’”