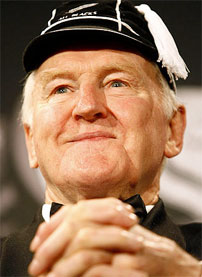 Sir Wilson Whineray, who captained the All Blacks 67 times between 1957 and 1965, has died in Auckland, aged 77. Judged by renowned rugby writer Terry McLean as the greatest of All Blacks captains, Auckland-born Whineray was a mobile prop with the handling skills of a back who played in a much-feared pack alongside Colin Meads, Kel Tremain and Ken Gray. In total, he played 77 times for the All Blacks, including in 32 tests – a remarkable tally in the days when only two or three test were played each year. New Zealand lost only four of the 30 tests played when he was captain. After retirement from the game in 1966, he studied on a scholarship for an MBA at Harvard University before forging a successful business career. Whineray was knighted in 1998 for “services to sport and business management”. “We have lost one of New Zealand’s great heroes and for the rugby community we have lost a much-loved patron and champion of rugby,” New Zealand Rugby Union (NZRU) chairman Mike Eagle said. He was the first player from New Zealand to be inducted into the International Rugby Board’s Hall of Fame in 2007.