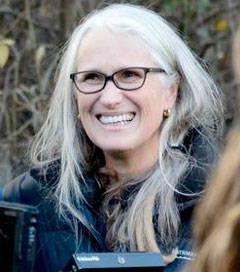 Everything is Not What it Seems

“It is typical of [director Jane Campion’s] sensibility that she would look at beautiful [Lake Wakatipu] and visualise a pregnant 12-year-old girl walking into it up to her neck, the central image of what would become her first foray into television production in more than 20 years: the six-hour series Top of the Lake. And it is entirely characteristic, too, given an illustrious career making films about women with all their eddies, undercurrents, struggles and complexities, that she would park a tribe of women ‘who have fallen off the edge of the earth’ in a camp made of containers in a place called Paradise near Glenorchy, with an enigmatic guru, GJ, played by Holly Hunter, with whom Campion had worked on The Piano (1993), for which they both won Oscars.” Campion was born in Wellington. She won her first Palme d’Or in Cannes in 1986 for short film, Peel.