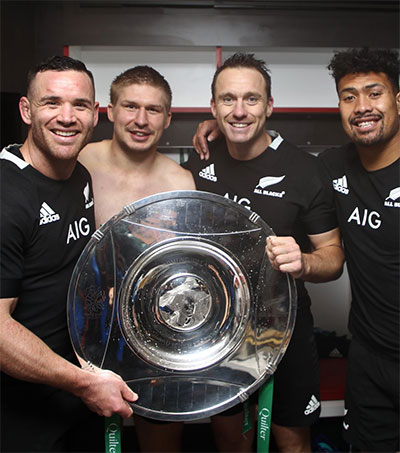 England Denied Victory over All Blacks

“The All Blacks looked a shadow of their usual selves in the first half but eventually fought back as Damian McKenzie and Beauden Barrett cut the deficit,” the Independent’s deputy sports editor Jack de Menezes writes in a report following the New Zealand England match at Twickenham, which the All Blacks won 16-15, retaining the Hillary Shield.

“Two early tries from Chris Ashton and Dylan Hartley, plus five points from the boot of Owen Farrell, put England 15-0 up in just 24 minutes as they threatened to pull off a second upset victory in as many weeks,” de Menezes writes.

“Barrett’s drop-goal and penalty ultimately secured the All Blacks a fifth consecutive victory over England.

“But having seen the TMO rule in their favour last week over Farrell’s controversial tackle on Andre Esthuizen, this time it was for Marius Jonker to chalk off Sam Underhill’s 76th-minute try, with the South African deciding that Courtney Lawes was offside with his chargedown that released the flanker to score.

“It proved a highly contentious decision that will debated just as hard, if not harder, than last week’s, but it should not be lost that England are proving themselves a match for the best teams the world has to offer.

“By their high standards, New Zealand were awful, and the main culprit was Barrett. Too often he missed touch with his kicks and when he failed to take a high ball, England attacked, and before the visitors new what was happening Farrell has moved into the pocket and fired over the lesser spotted drop-goal to increase the lead to eight points.

“But they are back-to-back world champions for good reason, and finally Barrett started to find his feet to get New Zealand out of neutral and into first gear. The injury-enforced departure of Sonny Bill Williams helped them, with Ryan Crotty providing a much better link in midfield, and when they finally broke the line they forced a penalty in front of the posts that would surely cut the deficit by three. Not for this side though, as Kieran Read made the gutsy call to go for the try, and within three phases Barrett sent McKenzie over on his inside shoulder as Slade and Farrell were sucked in and Te’o couldn’t get across to cover in time.

“England would not give in though, and with time running out, it looked like they’d won it. Replacement Courtney Lawes used every part of his six foot seven inch frame to charge down TJ Perenara, and with Underhill gathering and outsmarting Barrett to go over in the corner, the stadium erupted in delirium. Garces awarded the try, only to then decide to check if Lawes was onside, and unable to decide himself he left the decision to Jonker.

“‘Offside’ came the call, the decision was overturned and New Zealand were left to celebrate knowing how much of an escape this was.”

The All Blacks next take on Ireland at Aviva Stadium in Dublin on 18 November and then Italy in Rome on 25 November.