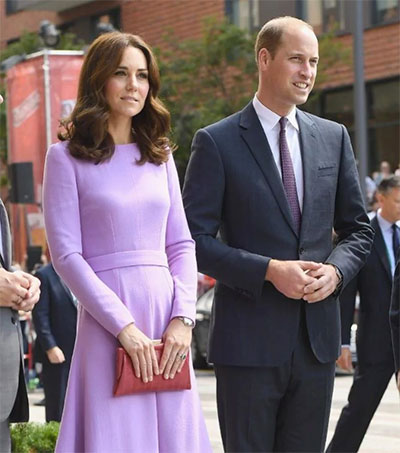 On the final day of her recent European tour, the Duchess of Cambridge took the chance to fly the flag for British-based fashion as she headed to Hamburg, wearing a dress designed by one of her favoured designers, Auckland-born Emilia Wickstead, the Telegraph’s Bethan Holt reports.

Kate Middleton turned to Wickstead, 34, for an elegant lilac day dress reminiscent of numerous Wickstead creations which she already has in her wardrobe. The designer, whose modern, tasteful and ladylike aesthetic has proved a hit with the world’s in-the-know socialites, has made many of the Duchess’ looks for everything from garden parties at Buckingham Palace to royal tours and military engagements.

The last time that the Duchess looked to Wickstead was for another of her recent “charm offensive” pre-Brexit deployments to Europe, when she visited Luxembourg for which she wore a sky blue wrap coat; her designs strike a suitably polished tone for these diplomatic missions. It was 2012 when Middleton first turned to Wickstead for a bottle green coat which she wore to visit the Irish Guards on St Patrick’s Day and has worn on several occasions since.

Although Wickstead is now top of the speed dial for some of the world’s best-dressed women, she worked hard to establish her business.

“One thing my mother always taught me was to just pick up the phone and ask for it. Don’t think, how am I going to meet that person? Just do it. I think that’s very much part of my New Zealand heritage. We don’t just give up – where there’s a will there’s a way. My mother instilled that in me from an early age,” Wickstead told the Telegraph in 2015.

“If I’d really known how hard I was going to have to work behind the scenes to have any kind of business, I think I would have stopped,” she added.