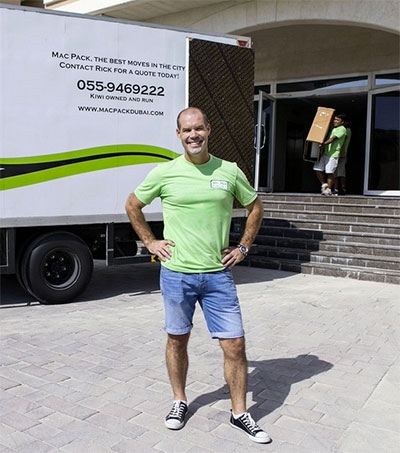 Founder of Dubai’s Mac Pack Removals Rick McIntyre, believes hard work, great service and a hands-on approach gives a customer service that people are happy to recommend. With no advertising and plenty of 80-hour weeks, he has grown his business to employ 12 staff using three vans in two years, the National’s Andrew Scott reports.

McIntyre wrapped up his job as a teacher in Dubai on 28 June 2013 and started his first paid removal less than a month later.

“I was in a borrowed van, which I was driving, I had hired three guys to help me and I had my father-in-law, who was 70 at the time, and a belief that with direction and diligence making a successful business was possible,” McIntyre says.

Today, Mac Pack employs 12 people, running two vans, and the business will be growing again very soon with the hiring of 6 more employees plus another van.

“While I didn’t set out to be a teacher, I had aspirations to be a professional cricketer. I loved teaching but it just doesn’t pay the salary you need out here,” McIntyre says.

Despite the level of initial investment needed to get his business on track, McIntyre is still excited about the company’s prospects.

“Yes its very expensive to run your own business but I love setting the tone for the business environment I work in,” he says.