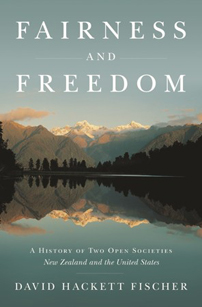 New Zealand and the United States are open and democratic societies with British colonial origins, a frontier legacy, a history of mass immigration and widely remarked-upon senses of optimism, but New Zealanders, by contrast, have organized their society around fairness, a principle that divides Americans. Pulitzer Prize-winning historian David Hackett Fischer’s latest work, Fairness and Freedom: A History of Two Open Societies, New Zealand and the United States, is the result of his quest to understand how and why these two open societies came to take such different paths. His exhaustive historical survey shows that New Zealanders of all political persuasions have embraced fairness, even if they disagree on how it is achieved. “It’s a country where everyone is insured against accidents — regardless of fault or cause — and is taxed to pay for it based on the danger of their profession.”