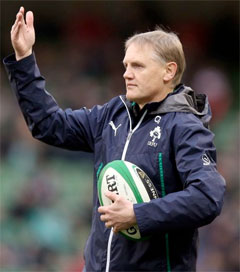 For those who have played under New Zealander Joe Schmidt, it was no surprise that his first campaign in charge of Ireland’s national team ended on such a high. Schmidt led the Irish to just their second Six Nations title in 29 years with a heart-stopping victory in France, Padraic Halpin reports for Reuters.

Despite using the change of pace of international rugby to spend more time with his young son who suffers from epilepsy, it is Schmidt’s preparation that has almost become a thing of legend, how hours are poured over video footage as soon as a game is over so any play can be picked apart the next day.

“He knows the game inside out but then he needs to review a game inside out,” former Leinster back New Zealander Isa Nacewa said. “Come Monday morning, you think you know what you’re talking about but he’s looked at it from all four angles and probably has a better idea.”

Schmidt’s mark was all over the 22-20 victory that was Ireland’s second win in Paris in 42 years, from the precise execution of their tries to captain Paul O’Connell’s disappointment at how they didn’t close the game out better.

For Irish fans, whose admiration for Schmidt has grown by the day, the only fear is that his native New Zealand may come knocking sooner or later.