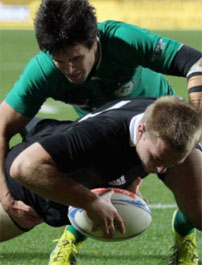 All Blacks Sam Cane and Sonny Bill Williams each scored double tries to inflict a record 60-0 defeat on Ireland and sweep their three-Test series. “We knew we had to start well and we didn’t, and that’s what the All Blacks do when they get a 15 or 20-point lead,” Ireland captain Brian O’Driscoll said. “They just play their own game and you’re running after them for 80 minutes. That’s how it was.” Cane, 20, making his first starting appearance after the flanker’s debut off the bench in the second test, scored his second try in the 44th minute. The All Blacks next play Australia in Sydney on 18 August as part of the 2012 Investec Rugby Championship.