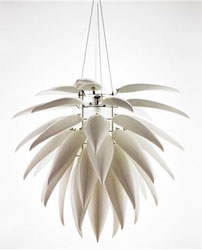 New Zealand-born designer and ceramicist Jeremy Cole’s porcelain Aloe Blossom suspension lamp hangs in the living room of German writer and producer Peter Schlesselmann’s one-bedroom flat in Berlin’s Tiergarten. The lamp has “such delicate china leaves that Schlesselman was terrified of breaking it.” “I am never moving house with that again,” he says.” Schlesselmann’s flat is in an apartment building designed by the grand-daddy of Bauhaus, Walter Gropius, with funds raised by famed German actress Marlene Dietrich. Cole has earned the honour of being the first non-Swede to have works purchased for inclusion in several of Stockholm’s stylish government buildings.