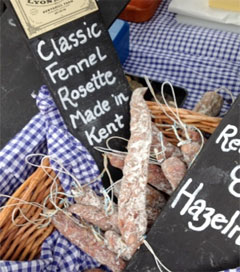 Days of Grey Meat and Three Veg Are Behind Us

Founder of Kent’s Moons Green Charcuterie, New Zealander John Doig, agrees with London delicatessen owner, the trend-setting Antonio Cardoso about promoting British farmers and too that charcuterie is a slow-pace, long-term income for them.

Doig, a former pig farmer, started making charcuterie two years ago, after transforming two fridges in his garage into curing stations. Now he spends his days surrounded by bellies, collars, loins, cheeks and several other parts of pig, and couldn’t be happier.

“The days of grey meat and three veg are behind us,” Doig says, taking a break from the butchery in Rye, East Sussex. “British free-range pork is arguably the best in the world. These butchers are driven by passion, not by their bank balances. They couldn’t do what they do if they were.”

British charcuterie is about well-kept animals, talented butchers, and entrepreneurs who are brave enough to take a chance on goose salami. It may be a slow-burner income but, if made with love, talent and top-quality meat, charcuterie may soon become the trump card of British farmers.