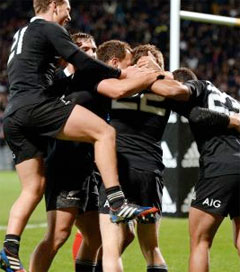 Crossing the Whitewash with Another Win over French

“New Zealand completed a 3-0 series clean sweep of France with a hard-fought but deserved victory at Yarrow Stadium in New Plymouth [winning 24-9],” the Irish Examiner reported. “Ben Smith’s first-half try helped give the All Blacks an 8-6 lead at the break and local boy Beauden Barrett added a second score in the final minute to finish things off as New Zealand recorded a 26th successive home win and seventh on the trot against France. The rest of New Zealand’s points came from the boot of record-breaking fly-half Dan Carter, whose four penalties and one conversion saw him move onto 1399 points in Test rugby on his 95th appearance. France took the lead in the eighth minute when South Africa-born number eight Antonie Claassen collected a towering midfield bomb, putting his side in position for [Florian] Fritz to slot over a drop-goal. That was followed by a scintillating sequence of play where the visitors were again sniffing at the All Blacks goal line after wing Marc Andreu split the defence then off-loaded to his support. But just as they had done a week earlier, New Zealand relieved pressure by stealing possession at the breakdown then launching a swooping counter-attack through Smith. Perhaps unimpressed by what he had seen in the opening half, New Zealand coach Steve Hansen wasted no time before summoning Tawera Kerr-Barlow and Tony Woodcock to enter the fray. That coincided with an apparent lift in the tempo from the All Blacks that France struggled to cope with. [When] replacement Barrett made his entrance [he] had his hometown crowd of over 24,000 in raptures when he crossed the whitewash at the sound of the full-time siren to wrap up the victory.” The All Blacks next play Australia in Sydney on 17 August.