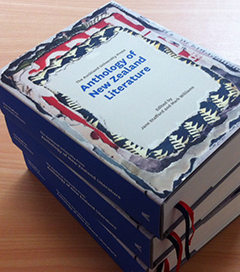 The Auckland University Press Anthology of New Zealand Literature edited by Jane Stafford and Mark Williams of Victoria University is reviewed by Peter Pierce for The Australian. He traverses the customary literary punch-ups that happen with the publication of anthologies: “sins of omissions” (30); access declined (Frame); and self-exclusion (Stead, Duff, and O’Sullivan who is quoted in the article referring to “the spectacle of the new tablets brought down from Mount Kelburn.”) The critical and literary historical passages that introduce the book’s large divisions begin with the image of the waka [Maori canoe]. Both “a container for the freight of history – personal, familial, tribal, national”, the waka is also “a knife through time”. The editors remark the shift from “the pro-empire nationalism of Maoriland writers such as William Pember Reeves to the stringent anti-colonialism of Curnow and his fellows” and the sidelining of women writers by “the masculine and high-culture perspective of cultural nationalism”. The anthology advances chronologically, from Te Horeta’s recollection of Cook’s visit in 1769 (as recorded by Charles Heaphy) to near the present. Structurally, there are 11 large sections: Contact; Colonial; Maoriland; Between the Wars; Cultural Nationalism; Fretful Sleepers: After the War; From Kiwi Culture to Counter-Culture; Earthly: The Seventies; Whaddarya? The Eighties; Cabin Fever: The Nineties; and How To Live Elsewhere. Among the surveyed are Mansfield, Hyde, Baxter, Curnow, Shadbolt, Tuwhare, Hulme, Stead, and Jones. Barry Crump and Yates Gardening Guide also feature.