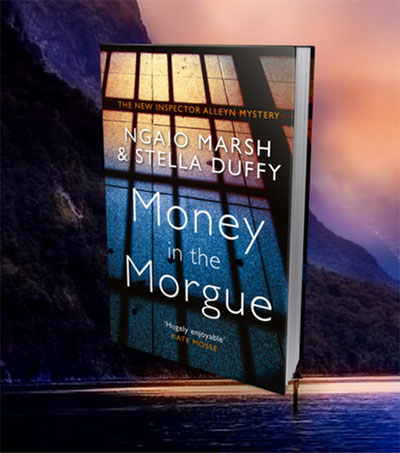 “Roderick Alleyn, the ineffably posh Scotland Yard detective created by [New Zealander] Dame Ngaio Marsh, returns for a posthumous outing with the help of Stella Duffy, herself a distinguished crime writer,” Andrew Taylor writes in a review of the novel, Money in the Morgue for The Spectator.

“It’s an inspired pairing – Duffy, like Marsh, is a New Zealander with a professional interest in the theatre. Marsh’s direct contribution to the book was small but significant: she had written three short chapters and made some sketchy notes on how the story might develop before she abandoned the project,” Taylor writes.

“Duffy, like Marsh herself, is very good at spare but effective characterisation; she knows the games people play and how they speak to each other. She has a dramatist’s grasp of structure. Best of all, she has the wartime New Zealand setting, which becomes almost a character in its own right. She captures not only the time and place but the unsettling ambiguities of New Zealand’s perspectives on both the war and the ‘Mother Country’.

“Between them, Marsh and Duffy have created A Midsummer Night’s Dream with corpses, clues and Kiwi accents.

“Money in the Morgue invites us to relish its artificiality and somehow, at the same time, transcends it. As one character, a traumatised doctor, remarks: ‘There is a great deal in New Zealand that is built on illusion and much of it ingenious indeed.’ Amen to that.”

Her home on the Cashmere Hills is preserved as a museum.