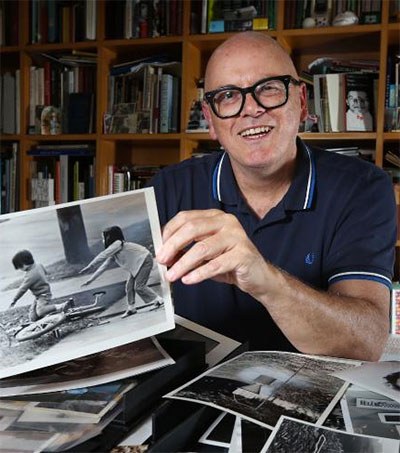 Remember when we stopped buying family photo albums? Artist-collector New Zealand-born Patrick Pound does, Rebecca Michael writes for the Herald Sun. It was when analog became digital, when Kodak film vanished into the ether.

But far from being nostalgic, Melbourne-based Pound uses the internet to unearth many of the “found photographs” that underpin his encyclopaedic displays.

Thousands are on show at the National Gallery of Victoria (NGV) Australia. Patrick Pound: The Great Exhibition is a treasure trove of images, a labyrinthine display of family photos and Polaroids, toys and kitchenware alongside 300 works from the gallery’s collecting departments.

“It’s about the interconnectedness of everything,” Pound says.

“How objects hold ideas and express meaning and connect. Or don’t.”

To tease out those connections at the NGV, Pound has ordered his images into categories. One room explores the idea of absence with an obsolete banknote, a comb missing teeth. Another focuses on photographers casting shadows. Elsewhere, Pound has people looking out of cars, people reading and pictures defaced by their original owners.

“It’s meant to be joyful,” he says. “A cross between a great museum show and a beach sale where all the works – whether they’re masterworks or mediocre – are treated with respect.”