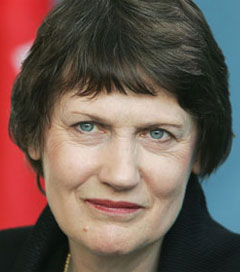 Helen Clark is calling for swift action to halt a surge of diseases such as cancer and diabetes in the Pacific, writes the Samoa Observer. Ms. Clark, a former New Zealand Prime Minister, is now head of the United Nations Development Programme (UNDP).  ‘Failure to curb the growing epidemic of non-communicable diseases (NCDs) now will lead to a significant toll on human life and well-being, and a great strain on health systems and families and public budgets, ‘ Helen Clark said. She was speaking in London at the launch of a series on NCDs by The Lancet, a UK medical journal. ‘By placing NCDs permanently on the global development agenda, people’s lives, opportunities, and future prospects will improve.’ Helen Clark said that quick intervention can decisively reduce the spread of NCDs. As an example, she cited the early global response to the HIV/AIDs epidemic. ‘Just as health shapes development, development shapes health. Poor health impedes lifting human development. Inequalities in health outcomes tend to mirror inequalities and inequities more broadly elsewhere,’ the Samoa Observer quotes Helen Clark as saying. The paper noted that Helen Clark’s address coincided with a meeting of Pacific nations in Fiji to address the NCD crisis in the Pacific region.