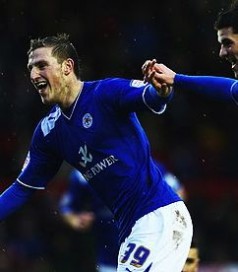 Chris Wood, All White and Leicester City striker, has missed out on joining fellow-All White Winston Reid in the English Premier League next season. Wood’s team were beaten 3-1 by Watford  in the second leg of their Premier League play-off match. Leicester had taken a 1-0 lead into the match but ended up losing 2-3 on aggregate. Wood had earlier helped Leicester qualify for the playoffs, setting up the winner in a thrilling 3-2 come from behind game against Nottingham Forest. That win enabled Leicester to finish sixth in the Championship, qualifying them for the play-offs with Watford, Crystal Palace and Brighton. Watford will contest the playoff final on May 27 against Crystal Palace or Brighton to determine the third promoted team from the Championship. Champions Cardiff City and second-placed Hull City earned automatic promotion. Wood finished the season as the fifth-highest goal scorer in the Championship. He was born in Auckland and has played 30 games for the All Whites. He first played for Waikato FC, before moving to West Bromwich Albion in 2008. In January 2013 he joined Leicester City, after loan spells at Birmingham City, Brighton, Millwall and Bristol City.