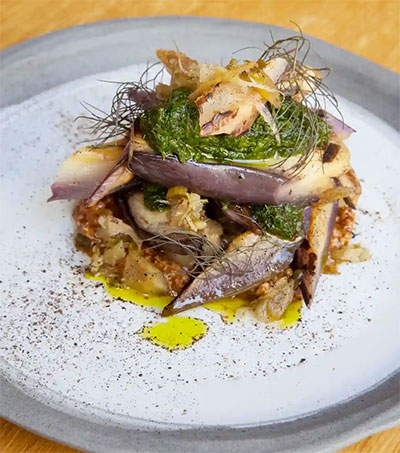 “This is an airy, elegant, happy room in Mayfair with a menu that will send vegetarians doolally with joy, but also has meat and fish dishes that are certainly no afterthought,” Dent writes.

“The vegetarian stars of the show, to my mind, are the soft, jammy Isle of Wight aubergine made even more glorious with a vivid green zhoug and roasted almond butter, and the miso-roasted cabbage with smoked hemp cream and molasses that’s awash with an umami sauce that you’ll want to cast a finger over to scrape up every last drop.

“What’s more, they’re delivered without sermon or soliloquy, because Apricity just kind of gets on with it.”

Nicholson, 41, is originally from Hamilton.