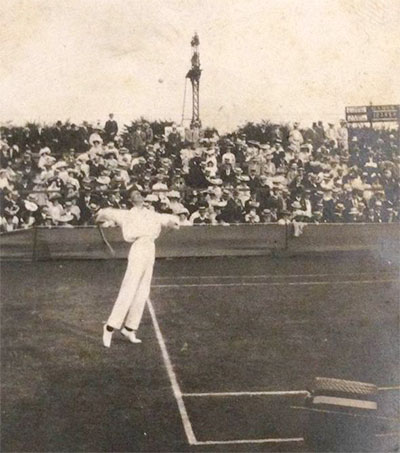 Rare photographs of New Zealand’s greatest tennis player, four-time Wimbledon champion Anthony Wilding, have emerged for the first time in more than a century, selling for an undisclosed sum to a New Zealand buyer at an auction in London.

The images were taken at the 1910 Wimbledon tournament, which was then held at its former site on Worple Road.

“They have never been published before and must be some of the earliest photos of the Wimbledon championships, given that they are 104 years old,” Andrew Aldridge from the auction house Henry Aldridge and Son in Devizes said.

Christchurch-born Wilding, who was also a multiple Davis Cup winner, Olympic medallist and world No 1, was engaged to a Broadway starlet before he was killed in France during World War I.

“Some say he was the James Dean of his day, but he was also the Federer of his day,” his great niece, actress Anna Wilding told the New Zealand Herald.

“When I look at Federer and his classic style, I often think of Anthony Wilding. They played a gentler game back then but these photos show a lot of technique, which he was well known for,” she said.

“He was a superstar, a pioneering athlete of the day.

“And not only did he fly the flags of New Zealand and Britain at top tennis tournaments around the world, he lost his life fighting for his country.”