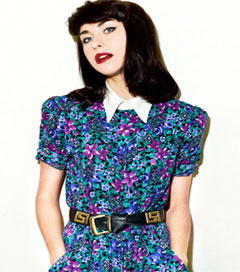 New Zealand singing star Kimbra sings Nina Simone’s “Plain Gold Ring” in this first in a Nikon-sponsored series of “Women In Music”-themed “Candid Covers.” “I was aware of Nina Simone as a kid growing up because I was in this jazz choir at school and we used to do these medleys of different jazz songs,” Kimbra says. Kimbra has conquered many formidable performances herself in 2012 — touring with Australian artist Gotye and Foster The People as well as completing her own first U.S. headlining trek. She will be spending the summer on festival stages down under. “Somebody That I Used to Know”, the track Kimbra sings with Goyte, has been nominated for Record of the Year at this year’s Grammy Awards.