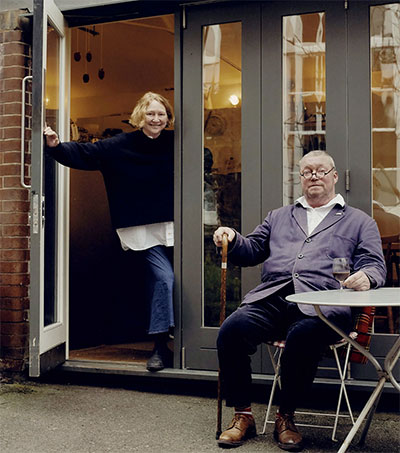 Chefs Fergus and New Zealand-born Margot Henderson have forged an identity for modern British cooking, grounded in technique and tradition. But will their legacy survive the divisions of Brexit? Julia Moskin interviews the couple for The New York Times.

Modern Britain may be a nation torn by the political and cultural battles over Brexit, which took effect on 31 January. But in London’s food world, these vastly different restaurants and a host of others, all shaped by Fergus Henderson, still happily coexist, Moskin writes for the Times.

“Fergus Henderson is the most influential chef of the last two decades, even though you have likely never heard of him,” Anthony Bourdain declared on Parts Unknown in 2016.

It’s even more likely that you have never heard of Margot Henderson. A chef with two popular restaurants and a high-profile catering company, she and Fergus have been married since 1992. Their food is nearly indistinguishable: simple, elegant renditions of British classics, drawn from a local and seasonal larder.

Over the last two decades, dozens of young chefs have been mentored by one or both Hendersons. Taken together, the couple’s North London restaurants – St. John in Smithfield, St. John Bread and Wine in Spitalfields and Rochelle Canteen in Shoreditch – form a kind of Henderson Triangle that has not only helped the city become a culinary destination, but changed the course of British cuisine. There are other important modern restaurants in England, like the River Café and the Fat Duck, but none as peculiarly British as St. John.

At an age (54) when most chefs find their knees and energy are giving out, and in an industry that routinely chews through working parents, Margot Henderson is becoming a famous chef in her own right.

“What she does has so much complexity, but it reads as effortless,” said the chef Danny Bowien, a St. John and Rochelle Canteen superfan. His own explosively seasoned food at the Mission Chinese Food restaurants in New York and San Francisco is the opposite of minimalist, but he worships at the Hendersons’ altar of perfectionism through technique.

Without leaning on sauces and spices, Bowien said, they “know how to tame the fattiness of a cut of meat, but they also know how to add fat to something like cabbage, and make it all taste like itself. That’s much harder.”