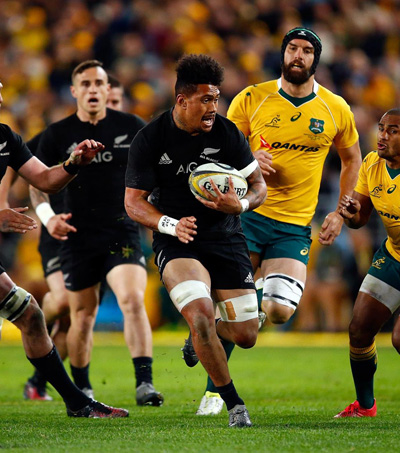 “It is always a pleasure to watch sporting greatness in action, so this was rugby ecstasy,” Sunday Telegraph rugby correspondent Steve James enthuses after the All Blacks thrashed the Wallabies 42-8 in the first Bledisloe Cup test in Sydney. It was New Zealand’s biggest win on Australian soil in 113 years.

“Yes, New Zealand were that good,” James writes. “And to think that this is supposed to be a side in transition after losing a number of legends following last year’s Rugby World Cup. But the truth is that there is little difference between that side and the one now. The names of those greats are not mentioned and the standards required are set as high, and those coming in have duly met them.

“They absolutely destroyed Australia, going 32-2 up by half-time with four tries and playing a brand of rugby that might have been simple but was quite devastating in its execution and thrilling in its pace and movement.

“Other teams can try to copy the All Blacks but in order to play this sort of game you need 15 players on the field not just with a mindset to attack but also with the requisite will to reposition as well as the handling skills and vision to bring it off. In that respect the work here of the locks Brodie Retallick and Sam Whitelock was astounding.

“So this was absolute confirmation that the All Blacks are some considerable distance ahead of the others, led by England at No 2, in the world.

“It was a day that had been given a strange start by the news of a bugging device being found at the All Blacks’ hotel earlier in the week. Nobody quite knew what to make of that, just as nobody could ever have imagined that Australia would be made to look so poor by the visitors to Sydney.

“With such a strength neutered it was as dispiriting a night as Australian rugby can ever have had. ‘It’s hard to know what to say,’ captain Stephen Moore said afterwards. ‘I feel for all our fans who came out tonight. It wasn’t good enough.’

“You can say that again. Or you could say that New Zealand were truly great, but whatever your viewpoint you can be sure that Moore’s team are not particularly looking forward to the return match in Wellington next weekend.”