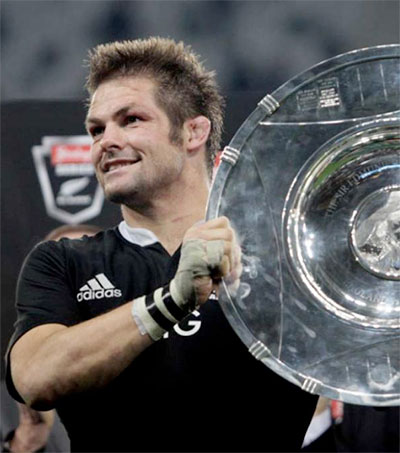 All Blacks Clinch Series Against England

New Zealand has wrapped up an unbeatable 2-0 series against England after staging a ruthless second-half comeback to win in Dunedin 28-27, the Guardian’s Robert Kitson reported from Forsyth Barr Stadium.

“The home side, who trailed 10-6 at the interval, have now won 16 Test matches in a row, one short of equalling the world record for a major international nation.

“The All Blacks also extended their unbeaten five-year home record at the expense of an England team who could not sustain their early control.

“The All Blacks, though, are not the world’s best team by accident. Back they came in the second quarter, competing hard at the breakdown, snaffling turnovers and looking to exploit any uncertainty on Manu Tuilagi’s wing. Once or twice they came close to succeeding but they could not always finish what they started and the half-time score of 10-6 was no less than England deserved.

“When [Owen] Farrell was sin-binned for trying to kill another surging All Black attack, England were suddenly staring down the barrel and a third try from [Ma’a] Nonu in the right corner effectively finished them off despite late consolation scores from Mike Brown and Chris Ashton.”

The All Blacks take on Australia in the first match of the 2014 Investec Rugby Championship on 16 August in Sydney.