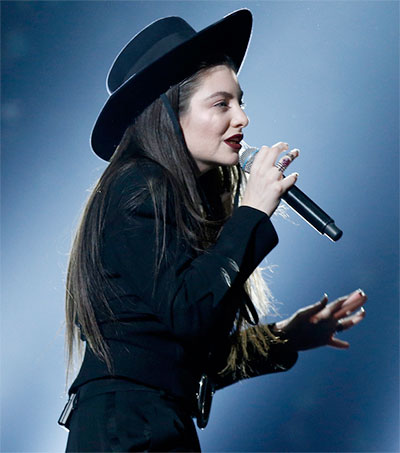 Teenage pop star Lorde, who has just won two Billboard music awards at a ceremony in Las Vegas and is in the midst of a sold-out world tour, talks to solo artist and Bright Eyes frontman Conor Oberst for a New York Times feature titled, “Mutual Admiration, Across the Sea, Across the Years”.

Though the two are separated by 17 years and several continents, in many ways they cover the same ground as confessional singer-songwriters, Melena Ryzikmay writes for the publication.

Oberst, now 34, started young too, releasing an album on tape at 13 in his native Omaha, and earning accolades as a musical prodigy before he graduated from high school. For a time, Lorde had a quotation from him in her Twitter bio: “No, I am not singing for you.” “It’s my mantra in life,” she said.

Ryzikmay asks if Lorde is nervous about writing her next album.

“Sometimes I am, but also I think, like, there’s just so much time between being 15 and being 18 or 19, which is how old I’ll be when I’m releasing,” she says. “I just think I’m so much better now. I’ve soaked up so many live shows, I’ve experienced so much more music. I feel like it’s equipped me to write in a way which is more exciting to me.

“You’re going to be fine,” Oberst says. “I don’t know how it was for you, but when I was young, I never particularly thought about how old I was. People keep reminding you how old you are. The funny thing is, they’ll just keep calling you young and then one day, you’re, like, over the hill.

At this year’s Billboard Music Awards, Lorde was nominated for 12 awards, the equal-highest nominated artist. She took home top new artist and top rock song for her chart-topper Royals, which she wrote when she was 15.

Original article by Melena Ryzikmay, The New York Times, May 20, 2014.

Photo by Getty Images for DCP.