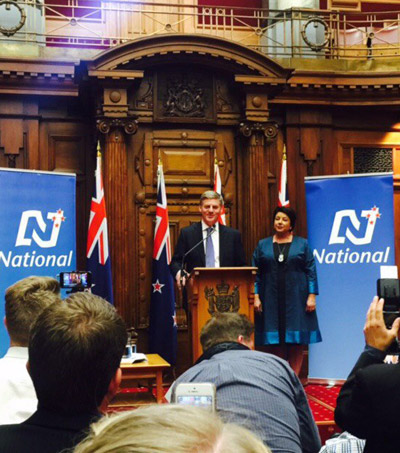 “Bill and Paula are outstanding leaders who will provide a good mixture of experience and fresh thinking,” said party president Peter Goodfellow.

“Under their leadership, New Zealanders will continue to benefit from the stable government they expect, along with a dedicated focus on delivering results for families and businesses.”

“Mr English, 54, was Mr Key’s preferred candidate to succeed him after serving as finance minister and returning New Zealand’s budget to surplus,” according to the article.

“English has been a politician for 26 years, after he was first elected to the parliament in 1990. He said he’s gained wisdom and experience since leading the party to an election defeat,” as stated in the article.

“I was 39 years old then, with six children under 13. So if nothing else, I’ve got the opportunity to focus much more on the job now,” said English.

“Mr English said he will deliver tax cuts and spread the country’s growing wealth to where it is needed.”