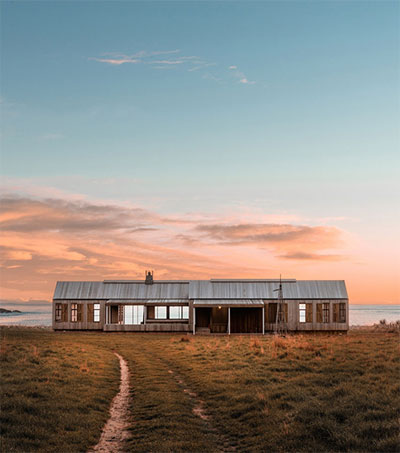 “The art of zorbing was invented in this gutsy country – but why roll down a hill when you can see it properly from one of its superior breed of sophisticated superlodges?” the magazine asks.

The latest addition to the 4000-acre Annandale estate farm, owned by New Zealand businessman Mark Palmer, is Scrubby Bay (pictured). “This remote, half-moon bay is sometimes battered by storms, but shelter can be found [here].”

“Borrow chef Paul Jobin from the homestead (who has worked with New Zealand-born, London-based Peter Gordon) and he will prepare slow-cooked lamb shoulder and beef cheek with potato gnocchi and local Motukarara asparagus in the kitchen and butlers’ pantry; if you’d rather fend for yourself, meals can be brought to the villa for you to heat up.”

Alternatively, chopper in on a “breathtaking flight” to a tented camp in the rugged Southern Alps for a stay at Minaret Station.

In the North Island, “within walking distance of the historic town of Russell and with 44 acres of private headland offering magical views of the Bay of Islands (a holiday magnet for cashed-up Kiwis), Rahimoana is the kingpin of the five villas that make up Eagles Nest.”