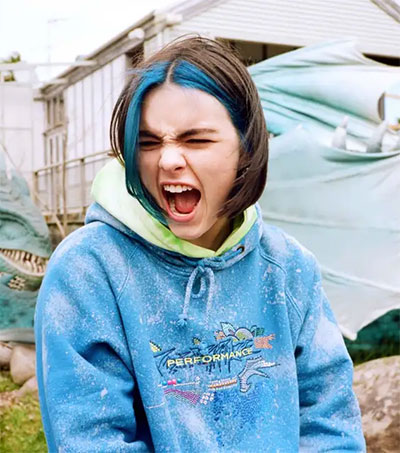 The irony of a song she wrote about loneliness going viral during a global lockdown is not lost on Auckland pop singer Stella Bennett, aka Benee, George Fenwick reports for London’s Evening Standard. Benee released Supalonely, featuring American Gus Dapperton, five months ago – but in February 2020, the song exploded internationally. Over just one day in February, streams of the track surged 400 per cent, and it’s now Benee’s biggest hit, with 126 million streams on Spotify at the time of writing.

The song’s sudden fame was thanks to TikTok, a video-sharing app which Benee says she “didn’t even understand” until recently.

Supalonely is the singer’s second brush with TikTok fame, Fenwick writes. Her previous song, Glitter, became one of the app’s famous dance challenges in 2019, but Supalonely’s virality has snowballed past it. It began when a user named @zoifishh choreographed a dance to match the song’s fast tempo. This was recreated by countless users – including one with a staggering 50 million followers, Emily Ratajkowski and Jason Derulo – and videos of users doing the Supalonely dance now number 10.6 million.

Benee, 20, knew nothing about TikTok until someone sent her a video of a user dancing to Glitter at the end of last year. “I was like, ‘what is this? Is it like Vine?’” she tells Standard Online. But the popularity of Supalonely is even more mind-boggling, she says; it happened “so fast, in a really weird time.”

The full song is a comical, self-deprecating pop tune which finds Benee feeling sorry for herself in the wake of a breakup, mooching about her house on her own, with lyrics such as “I’m a sad girl, in this big world/It’s a mad world” taking on an added gravity at a time of social distancing.

Benee is using her lockdown time trying to improve her production and guitar skills, working in her home studio writing and recording more songs. She was supposed to embark on a UK and Europe tour over summer, which she’s now trying to reschedule dates for; in the meantime, she’s working on a debut album that she hopes to release at the end of the year.

An album at the end of 2020 would cap off two of the biggest years of her life – a year ago, Benee had just two singles out and had played a handful of shows in New Zealand. She now boasts 272,000 Instagram followers and an endorsement from Elton John, who hailed her as “an amazing young artist” who “writes really brilliantly”.