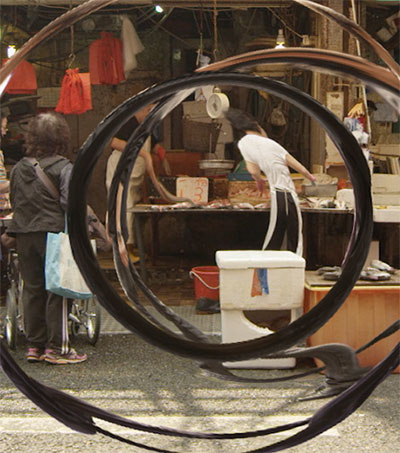 The New Zealand-born, Melbourne-based artist Daniel Crooks is known for his technically precise, hypnotic video work. His new show, Parabolic, on at Anna Schwartz Gallery in Melbourne, is about subverting our simplistic, linear approach to time.

Crooks, who won the prestigious AU$100,000 Ian Potter moving image commission from the Australian Centre for the Moving Image (ACMI) in 2014 and has appeared in major exhibitions around the country, including Melbourne Now, explains that he is putting time on its side and looking at it from a different angle.

His method is essentially based on slit-scan photography (a bit of visual trickery used to psychedelic effect in 2001: A Space Odyssey and Doctor Who), but it’s far more involved and advanced than that.

“They’re not tricks,” Crooks says. “It’s not a Photoshop filter, or CGI or anything − I only use what’s there in the real world. I’m just looking at time differently. I’m not cutting anything out, or editing. It’s literally a slice of time. An alternate view of how time unfolds.”

There are four new works on show. Two are static shots of revolving doors in Bourke Street office complexes.

“I’ve been looking at revolving doors around town and found them hypnotic,” Crooks says.

Here, revolving doors are pulled vertically to the sky. Time is sucked upwards, and people are twisted into a corkscrew. If you didn’t know what it was, or what Crooks does, you’d think it was an abstract work of shapes and lines.