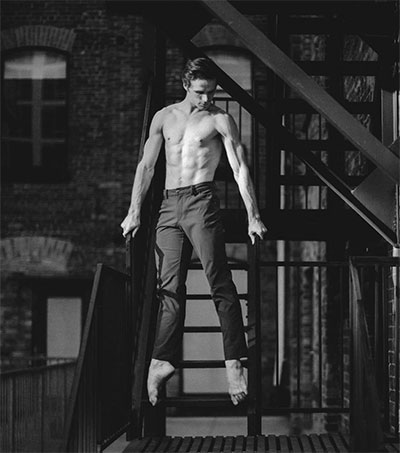 Some dancers take more than a decade to rise through the ranks of a professional ballet company. Others, such as the New Zealand-born Harrison James, manage a swift ascension in three quick seasons. The National Ballet of Canada just opened its four-night run of Christopher Wheeldon’s The Winter’s Tale at New York’s Lincoln Center, and 25-year-old James is the company’s newest and youngest principal dancer.

An elegant classicist with striking poise and emotional depth, James was virtually unknown when he joined the National’s corps de ballet in 2013.

If you’ve seen James’s classical work on stage – and if you’re an opening-night subscriber, you will have been lucky enough to have seen it many times – his quick rise will come as no surprise. Imagine the most dashing and magnanimous princes of 19th-century literature and you’ll conjure an idea of his magnetic presence as a performer.

When artistic director Karen Kain hired James in August of 2013, she was confident of his charisma and potential, but didn’t anticipate how quickly he’d climb the company ladder. “He became our hero,” she says, citing how he stepped up to the challenge of demanding classical repertoire when they were short on leading men. Most recently, this meant dancing Albrecht with three different Giselles, a feat of dexterity that would be difficult for a veteran. “I started to notice his capacity for hard work – his will and desire. The longer he’s been here, the more I’ve seen him want this for himself. I see a real commitment now.”

He’s as modest as he is talented, according to Globe and Mail journalist Martha Schabas, claiming that his real strength lies in good partnering. “I love telling a story with someone. I’ve never been a showman in terms of my dance ability. I can’t do a thousand pirouettes, I don’t have this crazy jump; I can’t do amazing tricks. I think I’m consistent and clean,” he says.

After dancing Polixenes in New York, he’s looking forward to a season that seems tailor-made for his classical bent, flush with pinnacle ballets that will let him dig deep into character and emotion.

James grew up on the Kapiti Coast. He trained at the San Francisco Ballet School and the New Zealand School of Dance.

Original article by Martha Schabas, The Globe and Mail, July 29, 2016.