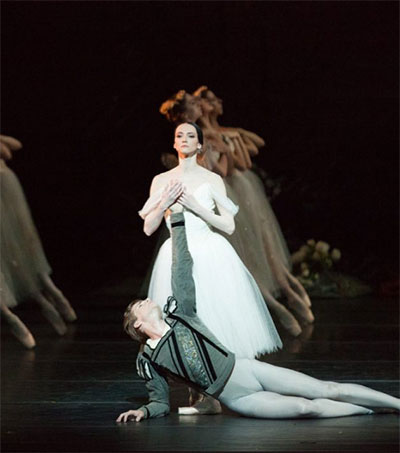 “Just because Giselle is [almost 200 years old] and populated, at least in its second act, by hard-core fairies, does not mean it’s a museum piece for fossilized ballet fans,” Crabb says.

“Cut through the surface and Giselle’s central themes of love, betrayal, forgiveness and redemption still resonate, as demonstrated by the National Ballet of Canada when the company revived its familiar production of the Romantic era classic.

“The evening’s title lead, Lunkina, first portrayed Giselle in her late teens, early in her career with the Bolshoi Ballet. It became a signature role. Although a decade younger at age 25, James is no stranger to Albrecht, the philandering nobleman who steals and then breaks the susceptible peasant-girl’s heart. James danced the role four years ago at the Royal Winnipeg Ballet in a Giselle produced by Britain’s Sir Peter Wright, the same man who first staged the National Ballet’s version in 1970.

“Experience provides opportunity for reflection, and both Lunkina and James not only danced beautifully but invested their roles with compelling dramatic depth.

“Lunkina projected such touching innocence and vulnerability there were moments in Act I, the village scene, when you felt inclined to shout out: ‘Hey, this guy you’ve fallen for is a two-timing bastard.’

“But you could equally understand how easily Lunkina’s Giselle could fall prey to an Albrecht as charming and apparently besotted as that presented by James. From the moment he enters you get the sense that this Albrecht, already betrothed in what we may assume is an arranged union, has escaped to a charmed world where he can set aside the weight of life up at the castle and give his heart free rein.”

In 2015, James was awarded the Patron Award of Merit by the Patrons’ Council Committee of The National Ballet of Canada.