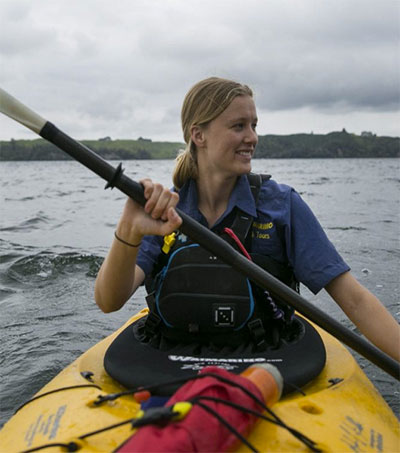 Sea Kayaking with the Promise of Glow-Worms

“Slipping away from the earth into the glassy, late afternoon waters of Lake Rotoiti is an action laden with familiarity. Once my two-person kayak, steered by Hilary Munro of Waimarino Kayak Tours, leaves the shoreline, I’m thrust into a moment of déjà vu,” Liz Beddall writes in a travel piece for the Toronto Star.

“Dense forest surrounds the narrow channels of water and the gentle dips of our paddles are the loudest sounds around save for distant bird calls and the occasional splash of a frisky rainbow trout. Vacation properties sparsely dot the shore and unkempt plant life bursts from neighbouring riverbanks into the lake.

“A few more moments and you might convince me that I was back in Ontario, paddling, perhaps, through Algonquin Park in the early summer. But then come the differences.

“I note that for every familiar pine tree there is an exotic burst of tropical ecology: gigantic palms, mighty kauri and neon-green beech trees invade the area, with branches that weave like massive leather ropes around neighbouring foliage.

“Moving farther downriver, the air begins to smell more distinctly of sulphur and while clouds are shielding the late afternoon sun, every small ray that splits through the sky is noticeably intense on my skin. There are no moose or bear to look out for, or swarms of bugs to swat away – just an incredibly still landscape and a promise of glow-worms to come after a cold drink on the grounds of an old volcano system.

“I guess I’m not in Canada anymore.

“‘Rotoiti means “little lake” in Maori, but it’s not so little,’ Munro explains as we paddle the waterway formed some 8500 years ago. She guides the excursion as part of Waimarino tours, which specialises in intimate and informative kayak adventures in Rotorua.

“‘People like to see the country from a different perspective,’ she says. ‘Sea kayaking is very popular here because there are so many different lakes and mild conditions with gorgeous scenery. And of course there’s the geothermal aspect as well.’

“As darkness begins to fall, the heavy clouds over the lake foreshadow that the stars will be invisible. But not to worry, reminds Munro, there is something far more brilliant on the way.

“‘Glow-worms are 100 times better at night time,’ she says as we head back out into the water.

“I learn as well that the Maori name for glow-worm is titiwai, which means light projected over water. Lake Rotoiti has been used as a main channel of travel, trade and welfare for local Maori for centuries, and in this supernatural hollow, it’s easy to understand why it’s rich in lore and legend.”